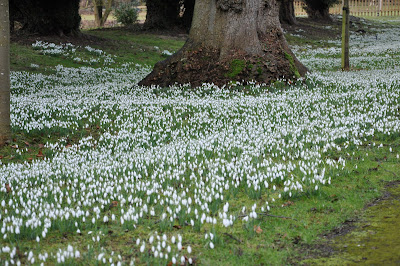 It seems that nearly everyone in the Northern Hemisphere
has had too much snow this winter
(except, perhaps, Vancouver).
In England,
February is a tug-of-war
between winter and spring.
All week long, we've had shafts of sunlight
playing peek-a-boo
with volleys of hail,
and flurries of snow,
and sheets of sleet. 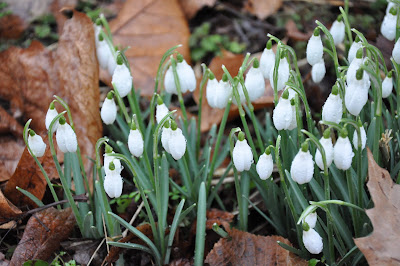 Never mind the frigid temperatures,
spring will eventually get the upper hand.
Snow-like they may be,
but these galanthus
are the first bulbs out of the starting gate.
Autumn leaves,
it's your turn to sink into the earth. 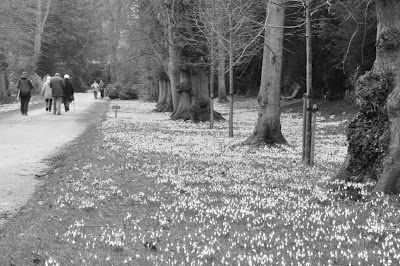 So soon now, the gray of winter 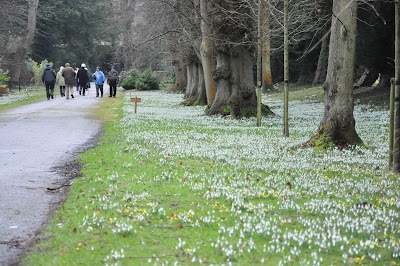 will be replaced by spring green. 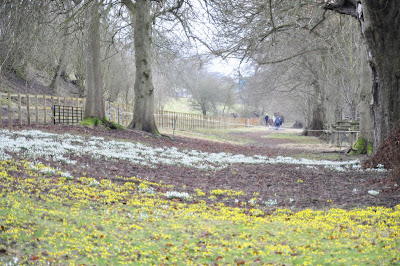 February is a pointillist painter,
adding a swathe of yellow aconites
to winter's monochrome palette. 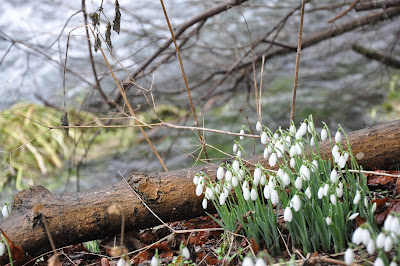 Not the showiest flower,
it's true,
but so refreshing.
Posted by Bee at 22:27 36 comments:

I'll race you to half-term 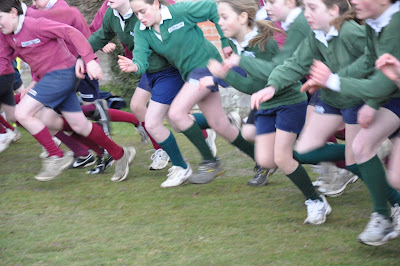 Barely have we recovered from the long Christmas holiday and snow days
but it is half-term, already.
Time for the cross-country race.
It's a tradition; and the accretion of years is such
that even the Headmaster can't recall
why February
is the traditional season
to don your shorts
and race around the frozen fields. 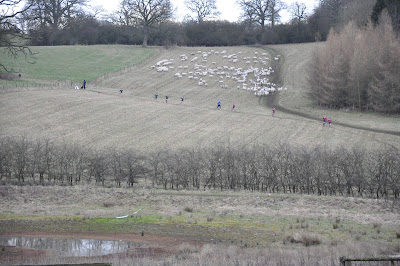 Double-click on the pictures
better to see the tiny racing figures
and the flock of sheep.
Do you suppose those sheep
look up from their munching
and wonder, idly,
what the fuss is about?
Might they get the notion
to join in? 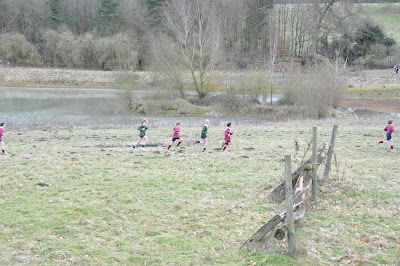 And now, we run around the lake
girls in green,
and boys in red. 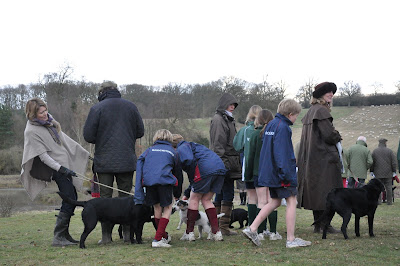 Unlike the runners,
the bystanders are all bundled up.
Wellies, tweed, a hat and most of all
a dog
are de rigieur. 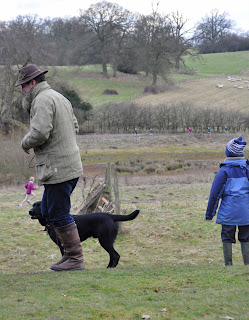 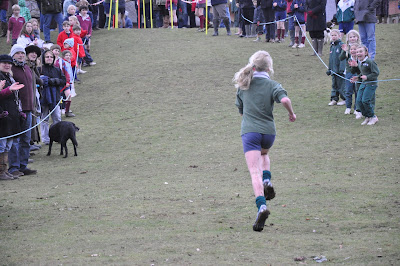 The last bit is all up-hill
and it separates
the sprinters from the stragglers.
You do get a boost from the crowd, though. 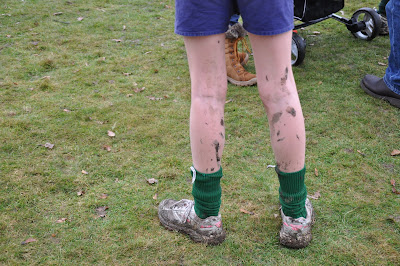 It's all over now . . .
except for the jelly doughnut, the hot chocolate
the warm bath
and two loads of sports kit in the wash.
Posted by Bee at 21:32 35 comments: 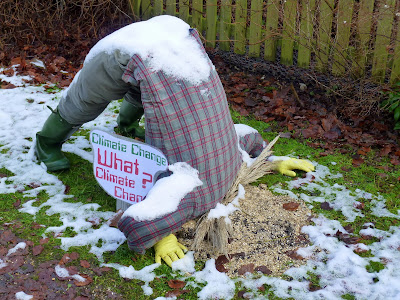 In January, our village in England launched a greening campaign.  These scarecrows popped up all over the place -- not to frighten the birds away, but rather to draw attention to the cause.  How many of us do have our head in the sand when it comes to climate change?

Our village chose eight actions to focus on, and it asked every household to adopt at least five.
Little things, really -- requiring some habit-change but no great (or even minor) deprivation.  Our household was already doing all of them, to some extent, although we could improve on shower time and turning off inactive appliances . . . and I still drop my daughter off at the bus-stop every morning.  (In this case, the emotional energy required to get her to walk more than a mile up-hill, with a heavy bag, and usually in the rain, isn't worth the CO2 savings.)

However.  Although cutting back on any waste is preferable to doing nothing at all, surely, these are still the sort of actions that Colin Beavan describes as "easy environmental half-measures" in his recent book No Impact Man.  Buying organic, recycling, using natural cleaning products, driving a hybrid:  these may slightly lessen our negative impact on the world, but they won't solve any of the big problems we face.

No Impact Man is an account of one family's attempt to live in New York City for a year with little to no environmental impact.   The book follows a roughly chronological timeline, which follows a sort of learning and living curve:  first, living in a way which creates no garbage; then eliminating carbon-producing forms of transportation; then eating only food which is produced within 250 miles of NYC; and finally, turning off the electricity altogether.  As he describes the family's adaptation, he also links each element -- diapers, for instance; or eating a piece of pizza -- to the larger cultural and economic climate.

The book is not really a how-to guide, though.  Although Bevan does provide many specific examples for living a no-impact life, the book is really more of a philosophical treatise.  Bevan is more interested in considering what value, if any, there is to only a few individuals making this kind of radical lifestyle change.  He wants to discover both the negative and positive aspects of going off the grid -- not just the electrical grid, but an entire of way of life based on convenience and consumption.

Although it isn't exclusively an American problem, Beavan is keenly aware that consumerism is so embedded in the typically American way of life that it is pretty much its bedrock.  As he phrases it, "to be a good citizen is to be an aggressive consumer."  I remember noticing how much environmental issues got derailed last fall during the economic crisis.  We (as people, as a governmental bodies) are interested in the environment only to the point where it doesn't impact jobs or salaries.

Last week my husband was at an energy conference and the panel of speakers admitted that there was no way that the UK could meet their targets for reducing carbon.   We know we need to do it, but it really requires a total overhaul of the way we live now. Technology can only help to a certain extent;  meanwhile, resources (clean water, oil) continue to dwindle.  "Clean" coal; what a misnomer.  Energy security is one issue, but environmentally, coal is a disaster, wind power is exorbitantly expensive and nuclear energy has all sorts of attached hazards.

The BIG problem is that populations continue to grow; the second biggest problem is that people continue to want to maintain (or improve) their standard of living.  Also heard at this conference:  one expert said that each (first-world) person represents about 3 tons of carbon in usage/waste . . . unless you take into account the stuff that we all use, and then the figure is more like 12 tons.  Yes, China is burning up all kinds of natural resources at the moment -- and most of them are being used to create stuff to sell in countries like the UK and the United States.

I was thinking about all of this last weekend when I went to IKEA to buy my daughter an inexpensive desk.  Have you been to an IKEA recently?  It's an enormous warehouse filled to the brim with overwhelming amounts of "affordable" stuff -- much of it made in China.  As I was checking out, I couldn't help but notice two rather ironic signs.  One of the signs proudly proclaimed that IKEA was a plastic-bag free space; the other encouraged IKEA shoppers to take public transporation, instead of cars, to the store.  At the moment, the IKEA experience seemed to encompass everything that was wrong with our current way of life.  The truth is, even if I could have taken a train to IKEA -- and we don't have a line that runs that way -- it would have cost more than the desk to make that journey.  Also, when you are going to a store to buy things like sofas and desks, the train is really not ideal.  Not using a plastic bag?  Well, I take my reusable bags everywhere, but really, that adds up to a small band-aid when it comes to overall waste.

I couldn't help but laugh when I saw the load of recyclables sitting by this "scarecrow" made out of recycled material.  It's better to recycle than to not recycle, but the real problem -- as Beavan points out -- is that we make so much trash. 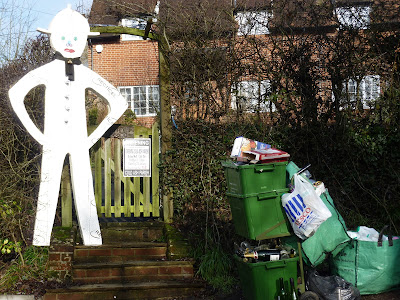 One of the interesting things about No Impact Man is that gives Beavan the chance to discover what aspects of modern life really are necessary for a good quality of life.  Clean water, for instance; but also a washing machine.  A television or a bread machine?  Not so much.  Beavan does acknowledge that any environmental measure that causes true deprivation or pain is unlikely to adopted by any but the most ascetic few.  Living without electricity is not going to appeal to many of us.

It seems really unlikely that our governments are going to solve this problem for us.  The recent Climate Change Conference in Copenhagen was not notable for its cooperative success. The measures adopted by my village aren't going to fix the environmental problems either -- but that is not to say that they aren't worth doing.  Thinking about climate change can make a person feel despondent; the problems are just so huge.  Ultimately, No Impact Man is really a book about what it feels like to take personal responsibility for a seemingly insurmountable problem.  It was definitely food for thought.

And by the way . . . of all of those energy-saving measures, the most meaningful is to turn down the thermostat.  It saves more CO2 than everything else combined. 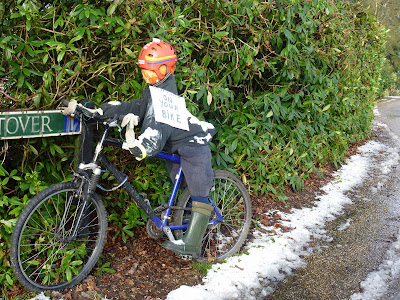