A bit of earth 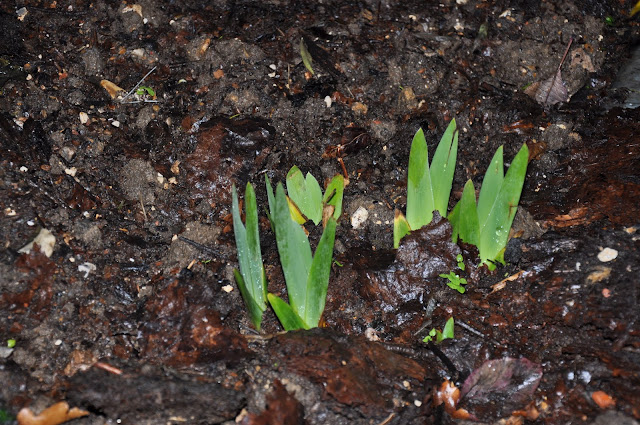 The seasons have gone by faster than usual this year, my daughter said to me as we were walking down a narrow, mud-slippery lane.
Not quite 14 is my daughter; have enough years gone by for her to utter this commonplace?
But then I reflected:   perhaps she doesn’t speak of time at all, in the sense of a seasonal round that seems to speed up with every passing year, but rather of the word that she actually uses.  Seasons, not time. The seasons – their expected shape, their accustomed progression -- have blurred.  That topsy-turvyness has been a feature all year long.
January now, and winter has still not come properly.   Fresh plants, not of this time, are presenting themselves in the garden:  a daisy from the summer, a pansy from last spring, patches of grape hyacinth usually associated with late February and spring green shoots everywhere.  An inexplicable mound of flat-leaf parsley has self-seeded itself by the porch . . . blown, no doubt, from the nearby pot where it failed to thrive during the cold, wet summer.  Spring already, if judging by all that activity underground and not the low, gray sky.
There are some years when it is a relief to turn the page, to buy a blank calendar and pin it to the wall like one’s colours to the mast.  I still have enough optimism to expect and hope that this year will be better.  That which has been stuck will be forced to shift and change.
This picture has to be decoded, explained.
The green shoots are obvious, what is not so apparent is the quality of the soil itself.
In December, the first “batch” of home-grown compost was spread on our garden.   I don’t mind sounding ridiculous here; it was a great satisfaction to me.
This compost took two years to accumulate, in a purpose made bin behind the garage:  countless trips with a pail of kitchen scraps, not to mention leaves and grass cuttings from many seasons.  Then two years to marinate in its own heat and weight, to break down, to become a dense rich brown.  When we lifted the heavy canvas I was thrilled (in the most physical sense of the word) to see what eight seasons had wrought.
Is two years a long time, or a surprisingly short one, for such a transformation?
So often it is our small, consistent efforts that gradually, so gradually, amount to some really worthwhile change.   All year I feel like I have been making compost of various kinds, and sometimes the effort has felt rather futile.  No doubt I have been nourished all along, even if the more obvious effects have been deferred.
Posted by Bee at 19:52

As a long-time practitioner of composting (that sounds a little pompous, how else to say it?), I am enthralled by your metaphor! And surprised to learn that spring is so early there.

Wishing you and yours a happier new year, Bee.

bee!! hurray for your surfacing let alone the plants which are a magical if strange treat at this time of year! it's going to be minus twenty-nine celsius here tonight. the green plants in my life are on the same side of the windows as me!!!! i'm going to wish you happiness this year knowing that your life, much like that of most people's, is always a cockeyed admixture of happy and sad but i'll wish that the balance tips in favour of the brighter of the two states!!!! steven

Happy New Yea, Bee and family
Yes, winter has scarcely set in here yet, most odd.
I love your image of possibly fruitful composting.
Such a lovely, thoughtful essay.
Hope your Christmas peaceful-ish.
Will write a longer letter soon.
Happy gardening!

Marvelous images, and, well, my body is very confused about what season it is in, so why wouldn't plants be? And I love it that your fourteen-year-old not only noticed the peculiarity but voiced it as well. It's so good to be back reading my favorite blogs... yours is one.

Nice to have you back! Happy New Year.

I am so glad to see you blogging and thank you for your visit to me. A lot resonates here. Compost now, we have nine compost bins so I may say without boasting that I am the compost queen, a title for which there is not much competition. It is so satisfying, producing from waste something which nourishes more life. I wish you all the best for 2012.

Our seasons are more blurry here, as well.

I love our ad hoc compost spot, but boy do I loathe carrying the bucket of scraps out to it.

So funny; I had just been thinking about composting! But more importantly, this is such a lovely, contemplative, inspirational piece of writing that I'm tempted to try something more meaningful than my usual post... but no. I will leave this particular type of genius to YOU. Beautiful.

Hallo Bee,
Ah, compost, such glorious stuff. I can understand your joy at making the stuff. Sometimes waiting for the good in life pays off.

Happy New Year to you and yours.

Congratulations on your compost - it sounds like a long but successful gestation! I dug my used coffee grounds into my garden soil this year, but I cannot claim to have done much more with my kitchen waste...
(I came to you blog via Kristen and her 'Kristen in London' blog. My family and I also lived in London for 12 years. Now we are struggling with being 'RePats' in our native land.)

Tonight I went out to call the kids in for dinner and I smelled...Spring! It was 80 here today, and to tell the truth, I find it a little upsetting. I'd like to count on January being herself. Sweater-weather, even in the desert.

Still in the throes of winter here...24 inches of snow and cold cold temps!
Your early spring and rich compost seems so heavenly!!
Happy 2012
Hugs
SueAnn

Hoping that this year brings you many good times as the seasons pass.

You can't beat a nice bit of compost and yours does look scrumptious.
Happy New Year to you and your family.

The Bee is back! Yay!

I, too, have daffodils and crocus starting to come up, just as the temperatures are finally acting season-appropriate... I hope they are not done for.

And I thought our winter was mild with no snow. How strange it must be to see blooms in January. We didn't even make it up to freezing today.

I'm thinking that parenting and composting are similar too. All that time and effort enriching your brood, waiting for them to bloom, which indeed your daughters have.

Happy New Year, Bee, it's good to see you back to blogging.

I am going to try my hand at composting this year.

I do hope this New Year will bring you much joy Bee!

First of all, I haven't been here in so long, and I read through the last five or six of your posts happily, absorbing your intellect and gentle way of making your voice heard. I can hear the steel behind the magnolia :)

I'm sorry your family has been going through dire straits. I absolutely agree about the small, steady work ending in gains..I'm experiencing that as we type. It comes around. It does.

In my garden we still have flowers from last summer!!! There are a few hummingbirds about that dip into the Turk's Cap and now the Jasmine is blooming. If we get a cold snap, a freeze I will need to protect some of the tender vegetation. As for compost, I'm at a loss. I had no idea it took so long to make new earth, but perhaps in the Texas heat it would go faster.

I have been thinking for years that I will start composting. I really must just dive in. (not a pleasant visual. ;) )

So often it is our small, consistent efforts that gradually, so gradually, amount to some really worthwhile change. All year I feel like I have been making compost of various kinds, and sometimes the effort has felt rather futile. No doubt I have been nourished all along, even if the more obvious effects have been deferred.

This is true in teaching, too.

I agree with your daughter. This is SUCH a rush, rush year. Even spring is arriving early.

"I still have enough optimism to expect and hope that this year will be better. That which has been stuck will be forced to shift and change." Beautiful words. I've recently started gardening...this is my first season, I enthusiastically look forward to composting, figuratively and literally. Thanks for sharing!

This is a great posting I have read. I like your article.

I am missing you, friend. I hope all is well.

I think there is something very satisfying about making a compost site! I now see this is an older post - what happened, I wonder...

Thinking of you,
hugs,
Merisi

I miss you too and hope all is well.

I still think of you, friend. And miss you. And wish to be in contact. And wonder how your book club is going.

Be well, my friend.

Welcome back Bee.... looking forward to seeing you on here more this year! Mx

Missing you!
Much love,
Merisi

This is very effective information to all people. I really glad to read the information from this blog. Clipping Path

Two years is a long enough break, right? Please say you are coming back.

Such a poignant post and a beautiful photo to accompany it.

I love your composting analogy. Indeed the change of season sometimes move slowly as we wait for our favorite time but it's the small steady one that build can build positive one in our lives. Thanks...:)